Every year my boyfriend and I head about three hours east to spend two weeks in a tiny town called Iola, Wisconsin. The town hosts one of the biggest car shows the Midwest has to offer, Iola Car Show. Each year we leave a little earlier, so we can spend the week cleaning up his aunt’s yard and making sure everything is in place before everyone else arrives. From Saturday until Wednesday we clean up the yard, pick up sticks and mow the lawn. Finally on Wednesday afternoon we can start washing the two cars we’ll take to the car show, a 1964 Ford Thunderbird and a 1951 Mercury.

My boyfriend, our best friends and I wake up on Thursday morning around 5:30AM to go get breakfast before we head over to the show just as it opens. Usually on Thursday we’ll walk about half of the 4,330 swap spaces at the car show. This year, walking that half ended up getting us 17,495 steps!

Friday we like to “sleep in” until six, just for good precaution we wash the cars one more time! Once they are all washed and dried we head into the car show to see the other half of the swap. Friday is a much shorter and more relaxed day than Thursday. We usually end up sitting under the shade of an umbrella for a few hours behind the cars, talking with admirers and admiring the great looking cars around us. This year was much different than others though, instead of hiding under an umbrella to get shade, we hid from rain and hail.

Saturday, yet again we bring the cars into show! By Saturday we have seen all the swap spaces there are to see and we just relax with the cars.  Saturday night when we all get back to my boyfriend’s aunt’s house we have a huge fire and cookout with all of our friends and family.

Sunday, the final day we all wake up and make a huge breakfast together before it is time to go home. After breakfast we take down our tents after ten days and make sure everything is back where it belongs.

This year our best friend left about half an hour earlier than we did, since he had to go back to his parents and do laundry before he headed back to his home in North Carolina. After we were all packed up, my boyfriend said there was a geocache in town that he wanted to grab, right next to the lake. If you don’t know what geocaching is, check out this link. My boyfriend said he had already looked up the coordinates and thought he knew where the cache was.

We got into town and got out to go find the cache, I just about tripped over it so he handed it to me and asked me what I thought was inside. I of course, that it was a cache! Then I opened that tiny box he had handmade, and found it, the ring.

After I opened that box, my boyfriend pointed out our best friend in the dugout of the baseball field! He had hidden and captured every perfect moment of our amazing proposal. 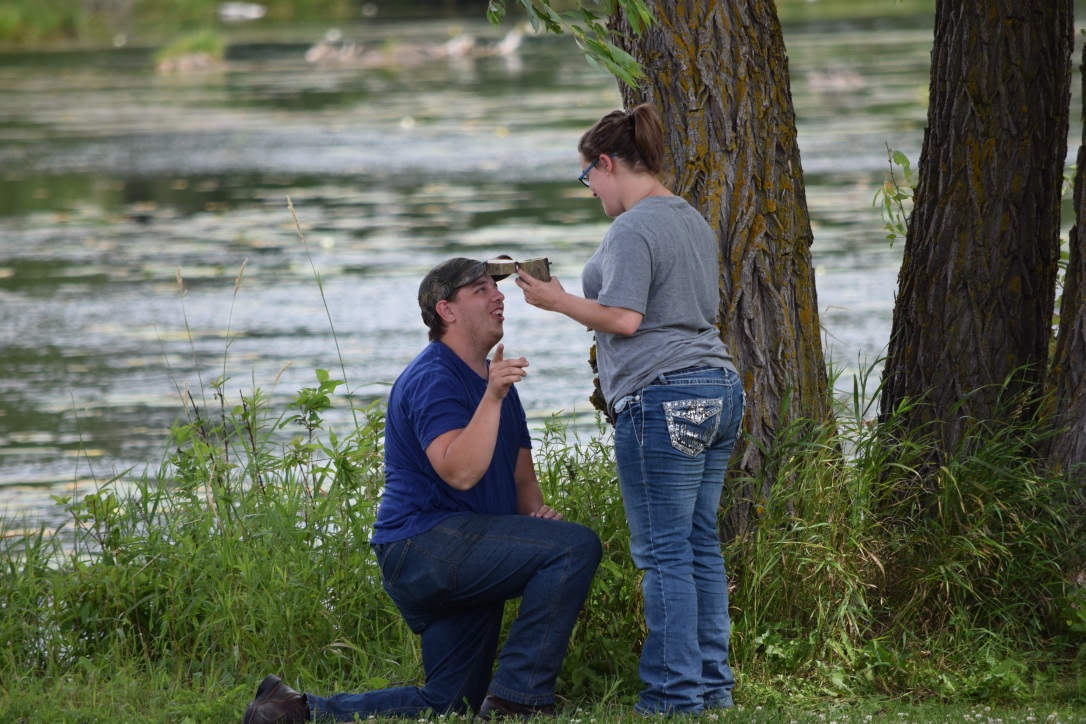 View all posts by RuralVA